Bringing a Collaborative Approach to Building Resilience in Northern Kenya

This blog is cross-posted from the American Foreign Service Association blog. In addition to submitting a winning case in the 2018 Collaborating, Learning and Adapting Case Competition Dorine Genga is the program management assistant for USAID/ Kenya and East Africa. Ms. Genga’s responsibilities include monitoring, evaluation and learning for the Water, Sanitation and Hygiene program and Feed the Future livestock and resilience activities. This portfolio includes $107 million in USAID investments in Kenya. Prior to joining USAID, Ms. Genga worked with an international nongovernmental organization on refugee resettlement. She holds a bachelor of education degree in business studies and geography. 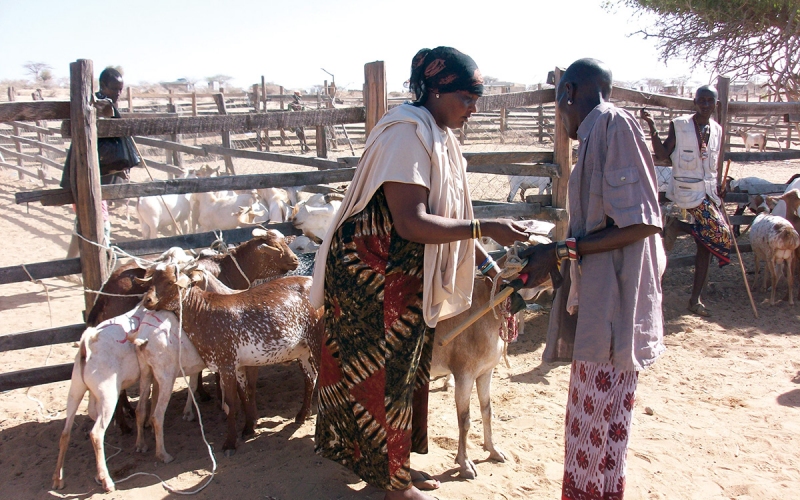 Following the 2011 drought in Kenya, many families lost their entire herds, leaving them without any source of income. The vendors at the Merille livestock market faced many challenges, including being forced to travel long distances in search of pasture, water and veterinary care. Credit: USAID.

What does drought look like to you? For the pastoralist communities in northern Kenya that rely on livestock herds to sustain their families, a drought can mean the death of their cattle, which may be their sole source of income. In northern Kenya, traditional culture places enormous value on amassing large herds of cattle, camels and goats as a sign of wealth and status in the community. These herds represent the entirety of these people’s assets, for they are generally averse to saving in formal banking systems.

In the north, the small percentage of the community that engages in farming is also threatened by droughts as crops wither and die. Severe droughts cause major challenges for farmers and pastoralists alike, not only in terms of their income, but also their ability to survive.

Drought-induced poverty often results in other challenges, such as malnutrition for children and expectant mothers, conflict, insecurity and increased vulnerability of women and children, because the men leave their homes and trek for longer distances in search of pasture and water for the already emaciated livestock. Sadly, I have seen this firsthand.

In 2011, an 18-month drought affected the Horn of Africa, leaving more than three million Kenyans in urgent need of food aid. In the wake of this devastation, USAID started the Resilience and Economic Growth in the Arid Lands project to spur livelihoods in a zone that was traditionally dependent on humanitarian assistance. Working with communities, the goal was to strengthen families so that they could weather the next shock—whether it be drought, a storm or cattle disease—without completely losing their livelihood.

I participated in a REGAL field visit in 2013, where I listened to pastoralist traders at the Merille livestock market describe the challenges they faced. One of the stories that touched me was that of one man who was robbed on his way home after selling his camels for $3,000. He was devastated. He asked for USAID’s assistance to get mobile banking to the area so that these transactions didn’t force them to carry large amounts of paper currency. A female trader also raised concerns about the long distance she had to travel to get veterinary services when her goats and sheep showed signs of infection. In one of the villages we visited, a lady stated she had only been eating one meal a day and would sometimes go two days without a meal. Her children looked really thin and miserable.

Following this field trip, I returned to the office with a deepened desire to make a difference in the communities we work with, especially for women and children. At the time, a partnership to link various U.S.-funded activities in northern Kenya had just been formed called the Partnership for Resilience and Economic Growth, or PREG. I took the lead to motivate and challenge our development partners and staff to improve the way we do business in northern Kenya so that we have a greater, more meaningful impact on the communities we serve.

As part of the Partnership for Resilience and Economic Growth (PREG), USAID works to improve business models in northern Kenya. Since 2015, the Merille livestock market has added mobile banking and veterinary services, and opened up trade to include vegetables and other products from the surrounding areas.

I am often referred to as “Mama PREG” for my nurturing yet tough-love approach to keeping the partnership focused on continual progress. Small changes I make in the way I think and work have the potential to make a big impact. As W. Clement Stone said, “Big doors swing on small hinges.” This is the mindset I promote and champion in my work, and within the partnership, I challenge all members to leave a legacy in the work we do every day.

Watch Dorine Genga featured in this short video about how USAID is fostering resilience in Northern Kenya via PREG:

The Merille livestock market is an example of PREG’s success. There I was able to directly address the challenges I had heard about on that previous REGAL site visit. In 2015, the Merille livestock market was being rehabilitated. As part of my work, I facilitate joint planning sessions among partners to identify the opportunities for collaboration, and include the needs of the community and the impact on the environment into the design.

With the new design, the community members have access to mobile banking to address security concerns, and commercial banks have even opened offices in the market. The county government started providing veterinary services in the market, making animal disease detection and treatment more accessible so that traders, such as the woman I met, don’t need to travel as far to treat their herds.

Moreover, the market has opened up trade beyond the sale of livestock, with vendors selling hot food, vegetables and other products from surrounding counties. Now, going to the market in this remote area affords community members an opportunity not only to sell their livestock, but also to buy their family’s provisions and seek health care services at the nearby Merille clinic. Partnership has played a major role in making the market functional, bringing transformation to the pastoralist community in Merille and northern Kenya as a whole.

A USAID survey in mid-2015 offered evidence of PREG’s impact. After 2 1/2 years, there was a documented 12 percent reduction in the depth of poverty and a 28 percent increase in women’s dietary diversity in northern Kenya. For me, this information validated USAID’s new way of doing business, demonstrating that collective actions lead to collective impact. At a personal level, the data provided the impetus for me to work to overcome challenges of a maturing partnership and facilitate an environment that promotes continuous learning and improvement.

One of my proudest moments was when I co-designed and facilitated a transformational leadership training workshop for PREG’s county-level leads. One participant stated that his takeaway nugget from the workshop was this: “The essence of a partnership is working together to improve outcomes that improve a community’s well-being.” This workshop demonstrated how we have cultivated transformational leadership among our stakeholders as champions for change—a key component to Kenyans’ ability to transform the arid lands and maximize the sustainable impact of U.S. government investments in Kenya.

So, you want to start a podcast?

CLA Through Data Management Systems: A Tale of Two Projects

A New Normal: Adapting our Approach to MERLA during COVID-19