This blog was cross-posted from the Multi-Donor Learning Partnership (MDLP) website.

A little more than two years ago, a small group of knowledge management (KM) and organizational learning (OL) leaders and practitioners in some of the world’s most influential sponsors of international development, met in a generously windowed conference room in Stockholm.

The attendees at that first gathering represented the leading KM and OL minds from a collection of some of the most impactful organizations in international development, including USAID, UNICEF, DFID (now the UK’s Foreign, Commonwealth & Development Office), Sida, the World Bank, and the Interamerican Development Bank (the group subsequently added GIZ, IFAD, and the Wellcome Trust).

The meeting in late September 2018 hosted by Sida -- the Swedish International Development Agency – was the inaugural gathering of what became known as the “Multi-Donor Learning Partnership”.

What made this group different was its voluntary nature, and its shared commitment to form an intentional community of like-minded practitioners to serve as a peer-support network to collectively strengthen – and demonstrate the value of – intentional KM and OL efforts in improving development results. They realized we were all working on similar challenges and that we could do better by learning from and supporting one another.

Recognizing that this group  was an experiment with no guarantee of “success”, the members agreed to explore the partnership for an initial 24-month term, at which point they would conduct an intentional “Pause and Reflect” moment to assess whether it had provided value, and decide whether to continue on beyond September 2020.

Two years on, the group (now nine members) fulfilled that commitment for a pause-and-reflect moment about progress for the partnership.

On September 29 and October 2, 2020, the Multi-Donor Learning Partnership members met virtually for the second semi-annual meeting of a year dominated by a global pandemic.  A cornerstone of that gathering was the retrospective look at its two years together, culminating a two-step process facilitated entirely virtually.

For a two-week period, MDLP members had access to a virtual space where they could take time to review intentions, progress, and results, and add comments, reflections, and suggestions related to three overarching questions:

1.     What did they hope would happen when they joined the partnership;

2.     What actually happened over the course of the 2 years; and

3.     What should they do differently if we decide to continue on?

During the final two-day meeting of this phase of the MDLP, members of the MDLP were then facilitated through a process by Piers Bocock (Acute Incite) and Chris Collison (Knowledgeable Ltd) during which the results of individual reflections were synthesized and discussed. 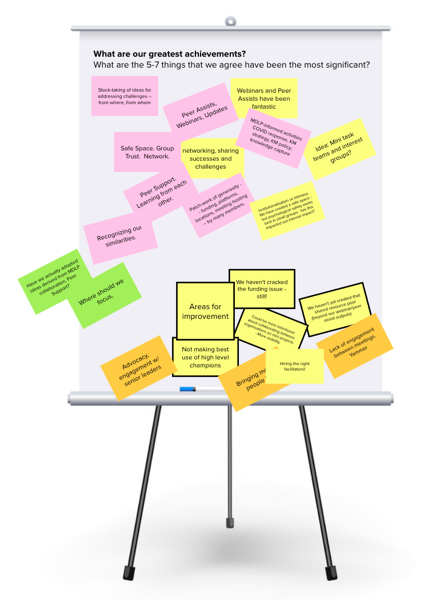 Recognizing that many informal inter-organizational groups like this rarely produce value beyond networking opportunities, the partnership was able to identify positive outputs and outcomes while also identifying areas for improvement if the group agrees to continue its collaboration.  Specific results identified as part of the reflection included:

·      The creation of a Learning Culture, despite its mostly virtual nature. One of the widely acknowledged primary outcomes was the creation of a supportive, trusting and open culture of learning across the community members.

·      A plan for a co-created compendium of practical KM/OL Cases from MDLP members that highlight different but complementary elements of effective KM/OL for development efforts.

Following this in-depth reflection, partnership members made the unanimous agreement that yes, the MDLP had indeed helped its members in their work, and that there was real potential to ramp up more collective activities moving forward. The first demonstrable result from the next iteration of the MDLP is likely to be the publication of a book which will draw out KM/OL insights, examples, guidance and future perspectives around effective KM and OL for international development organizations, expected by the summer of 2021.