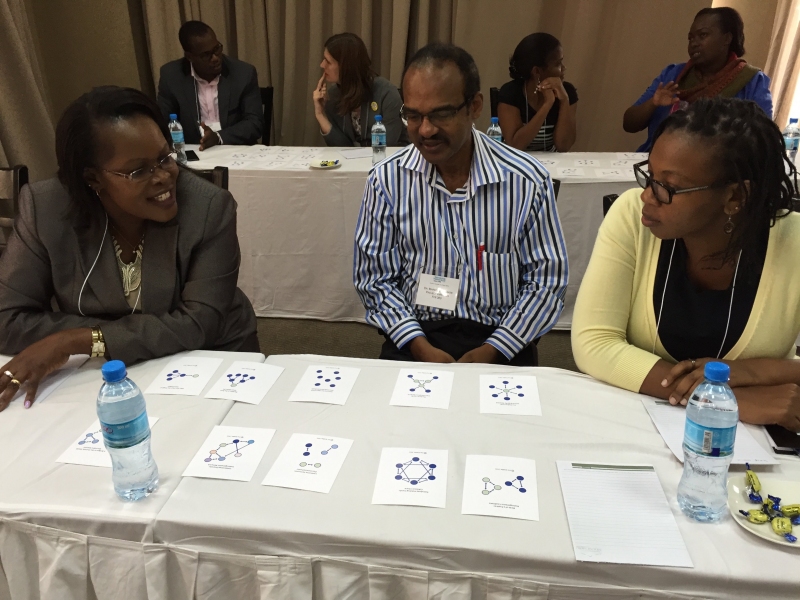 To support a Share Fair attended by 102 participants from 14 countries across East, Central, and Southern Africa, K4Health introduced a Net-Map exercise to learn more about networks that facilitate knowledge sharing across countries. Net-Map, an interview-based mapping tool, helps people understand, visualize, discuss, and improve situations in which many different actors influence outcomes.

Two days is the ideal time needed to develop and discuss Net-Maps with a group of people who have a stake in a particular topic or issue. Since we could only dedicate two hours for this activity, we adapted it for a one-and-a-half hour activity based on Eva Schiffer’s guide on 10 prototypical patterns.

Attendees, many of who were unknown to each other, were asked to consider their ideal network as well as the pros and cons of the established networks (as they exist in theory and practice). Meeting notes showed a diversity of thought about the patterns; no pattern was a good fit for every context. The Boss is the Boss pattern elicited discussion about the disadvantages of traditional hierarchies including distortion of knowledge resulting from too many intermediaries. Everybody Holding Hands was one of the most celebrated patterns but could contribute to knowledge overload. The Celebrating Diversity pattern was related to interdisciplinary teams that can create efficiency and drive innovation: strategically choosing what knowledge to share, how, and with whom was also noted as a budget imperative.

The exercise was something that all attendees could relate to intuitively since each works within a formal structure involving other people and actors. The attendees appreciated the visual and tactile aspect of the activity, shifting the cards around, pointing at them, and holding them up to display to others. The success of the activity also had a lot to do with the selection of attendees; those who were invited had been carefully chosen to attend the Share Fair because they had a positive attitude towards learning, possessed soft skills (including the ability to communicate effectively) and had interest in developing and nurturing strong interpersonal relationships.

It was a great way for the organizers to get a sense of attendee perceptions of possible ways of working together as well as stimulate conversation in a fun, and unique way. It also illustrates a very basic but tangible way to introduce systems thinking, which is critical for higher level KM.

The low-tech nature of the exercise, relatively few resources needed, and customizable nature position this activity as a tool that could be included in training of trainers events. While the attendees of this Share Fair all came from a different organizational backgrounds, the activity could also be very powerful when working more in-depth with intact teams or with emerging coalitions, to facilitate the clarification of how they could work together and with partners.