Cracking the Evidence Conundrum: Four Ideas to Get People to Use Evidence 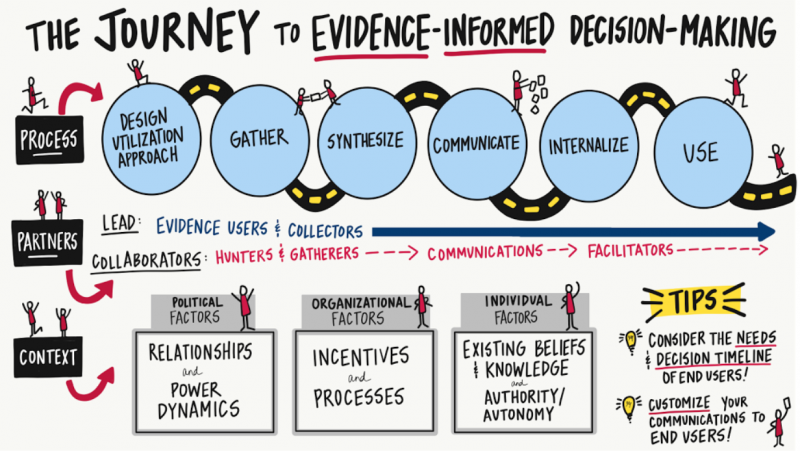 This visual summarizes findings from a recent literature review on evidence-based decision-making. This work is supported by the Global Development Lab (the Lab). We will be sharing the full report here once it is available. If you are interested to learn more, please contact the authors or Jessica Lucas at the Lab.

It is fairly obvious that using evidence to inform our decisions makes sense. USAID’s update to its operational guidance includes evidence-based decision-making as one of its key principles and collaborating, learning and adapting (CLA) as an approach to operationalize this. But using evidence in our daily lives is easier said than done, so what is stopping us from using evidence?

“USAID’s decisions about where and how to invest foreign assistance resources should be based on analysis and conclusions supported by evidence.” (ADS 201 series, pg. 11)

Despite these barriers, there are some insights from research on evidence-based decision-making that can help us be more intentional about applying evidence to our decisions: To read the full literature review this is drawn from, click here.

Yes, these more collaborative, user-centered, and intentional approaches can take more time. But implementing an approach that doesn’t have an evidence base or designing programs without reference to the evidence base is potentially far more costly to the U.S. Government and program participants in the long-term.

How have you integrated evidence into your decision-making processes? What barriers have you faced? And what approaches have worked in your organization?