Planning an Unconference: Lessons for Next Time 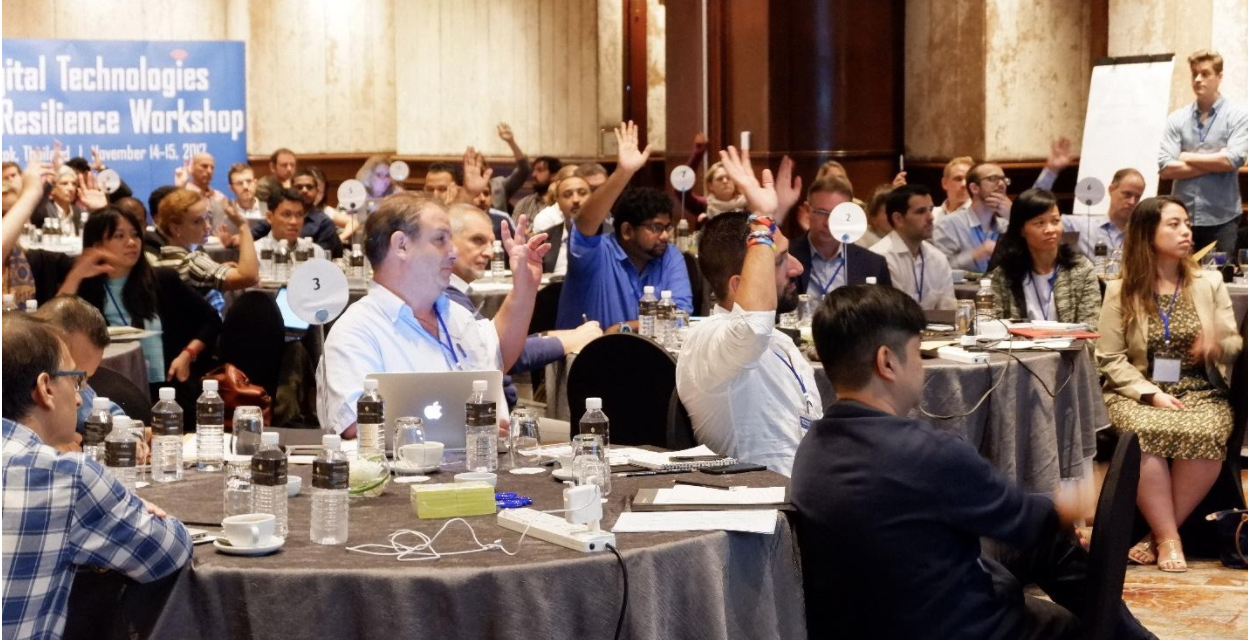 When I first met with my counterparts at the Rockefeller Foundation and USAID earlier this year to discuss the event we were planning to hold on digital technologies for resilience with their financial support, it was clear that we all agreed on one thing: we did not want this to be a typical conference, with lots of sitting and lots of listening. What eventually became the Digital Technologies for Resilience Workshop evolved over several iterations, fed by both our own ideas as well as the inputs we solicited from the broader community.

Ultimately, we settled on two overarching objectives. We would aim to:

The final agenda included a mix of short presentations, demos, facilitated group work, and semi-structured activities. The energy in the room over the two days was much higher than most events I’ve been to, and overall the feedback from participants was quite positive. More than 88% of participants who completed the workshop evaluation said they would be either definitely or be highly likely to join us again if they had a time machine and the chance to do it all over.

As this was our first attempt to create an unconference, it was far from perfect, but we definitely learned a lot along the way. Here are the top five lessons learned through this process.

Solicit design input early and then again. We first started notifying people of the workshop six months in advance, inviting people to pre-register and to share their initial expectations and interests. Three months out, we sent out another email to people who had already pre-registered, as well as those in our broader networks, asking for their inputs into a draft version of the agenda. We kept the draft agenda, as well as a form to provide feedback, online and continued to revise the agenda based on the feedback we were receiving until we finally arrived at the final version a couple of weeks before the event.

Who’s in the room matters. We decided early on that we would set the maximum number of attendees at 80. We felt that somewhere in the range of 60-80 was likely the sweet spot for creating the right level of intimacy, while at the same time having sufficient diversity. As we had well over 200 people apply to attend, we needed to take very deliberate decisions about who we would invite. We wanted to have a mix in terms of the type of organization (resilience implementer, tech firm, donor/investor, academic), resilience lens (economic, health, climatic, etc.), country, and gender. We also wanted people who were going to be eager and active contributors, so the thought they put into their registration form was also a factor. People with responses like “I want to join because it looks interesting” were weighted lower than those who gave us a deeper sense of how the workshop would be of value to them and what value they would bring to the workshop. Overall, all of the time we spent poring over participant applications and being deliberate in our invitation decisions paid off, as participants rated the quality of other participants as one of the things they liked most about the workshop.

Figure out how to best engage with participants before the event starts. Despite being able to solicit significant input into the agenda before the workshop started, one thing that we were less successful at was gathering substantive input from participants in advance. We had originally envisioned a session called ‘Tour of Resilience Challenges’ where we would print out and share challenges that resilience implementers were facing in their work. While we included a question to gather this content in a survey we sent selected participants before the start of the workshop, most of the responses were too short or generic to be useful. Rather than having this question embedded as part of a longer registration confirmation form, it may have made better sense to send people individual emails providing much more context into why we were seeking this information and the level of detail that we expected. 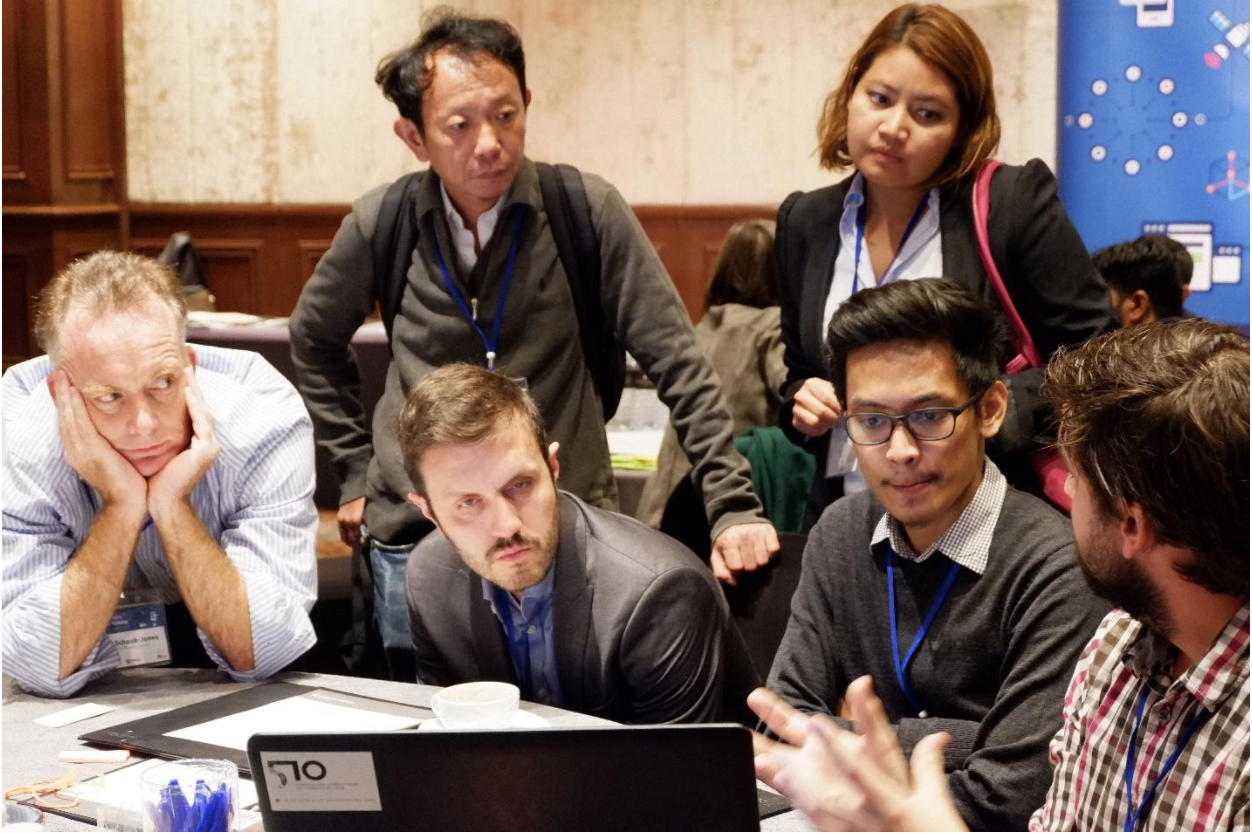 Create space for in-depth networking. Having sufficient time for people to deeply connect with each other was one of our main objectives, so we tried to build in as many opportunities as possible to facilitate in-depth networking. On the first day, we assigned people to tables based on others who were doing similar work and had similar interests. It took a lot more upfront effort, but it also significantly increased the chances that people would be seated next to someone who they could strike up a relevant conversation with. The morning breaks were also 45 minutes long on both days to provide enough time for people to use the restroom, grab their coffee, tea, and snacks, and still have time to have a couple of substantive conversations. The design thinking and semi-structured sessions we included in the agenda were also designed to facilitate opportunities for networking. After the end of the first day, we also hosted a networking reception in the evening for participants. Overall, this seems to have been worth the effort, as participants rated networking opportunities extremely highly in post-workshop feedback. One thing that was suggested in the feedback that we thought about doing, but did not, was to have some form of “speed dating” networking session. That could be something to explore next time around.

Use semi-structured sessions wisely. We designed a couple of semi-structured sessions, which sounded really exciting in our heads, but did not fully materialize as we’d envisioned. One of them was called My Big (or Little) Question. It was an opportunity for participants to have conversations on specific topics, such as data ownership or community engagement, sparked by questions that participants had submitted in advance of the workshop. We had scheduled these two sessions back-to-back on the afternoon of the second day. While the first session went fairly well and was highly rated by participants in the post-workshop feedback, the My Big (or Little) Question session completely fell apart. I still think that it had potential to be a good session, but if I had to do it again, I would definitely have not put these two sessions back-to-back. In addition, I probably would have cut down on the time allocated for both of them a bit. In the end, having what amounted to a continuous two and a half hours of semi-structured sessions just did not work.