What is this thing called 'Theory of Change'?

This piece originally appeared on the author's blog on March 9, 2016. It has been cross-posted with permission. 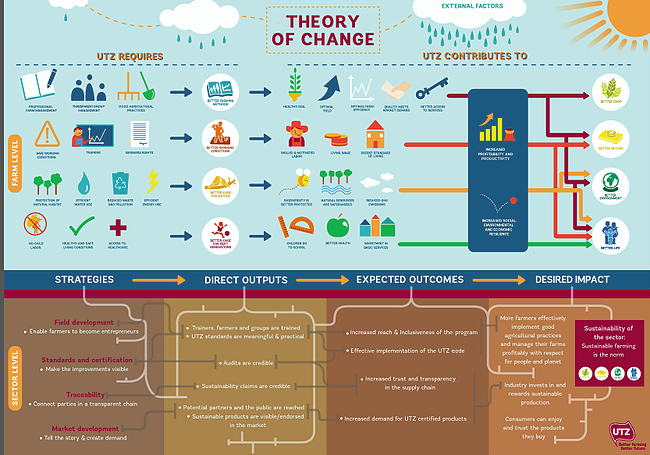 Within the philanthropy, not-for-profit and government sectors there are thousands of social programmes being implemented by hundreds of organisations world-wide. All of these entities are convinced that they are doing good work that makes a difference in people's lives.

How can these organisations make the grand claim that their intervention or programme actually leads to lasting changes?

Well, this confidence is mainly due to their Theory of Change (ToC). As the name suggests, a ToC is the thinking behind how a particular intervention will bring about results. 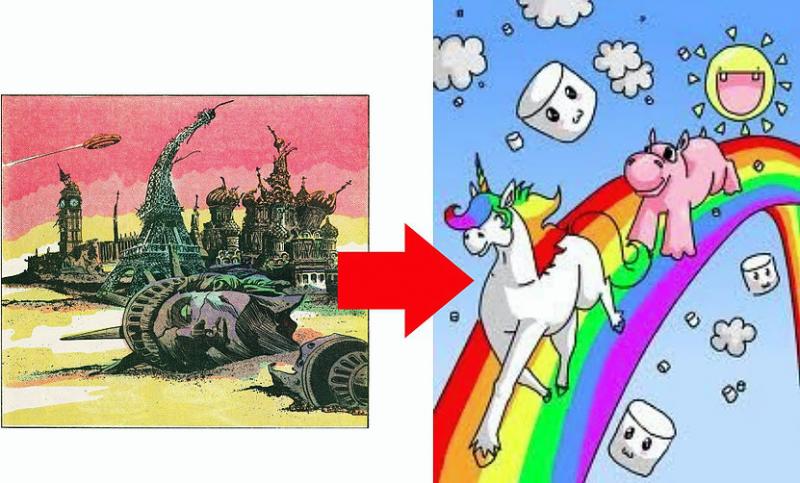 *In this article I will give an introduction to the concept of ToC and refer to additional resources for persons wishing to immerse themselves in the subject.*

The process for developing a ToC usually starts with asking the question 'What is our long term goal or outcome?' For example, the long term goal could be to protect a nation's children. Once this goal has been identified, the next consideration is: “What conditions must be in place for us to reach the goal? For example, in order to protect the nation's children, children have to know their rights and the government has to also recognise these rights and put policies in place.

These necessary conditions (educating children on their rights and lobby and advocacy with policy-makers) would then be shown as outcomes on the Theory of Change pathway, underneath the long-term outcome (protecting the nation's children). 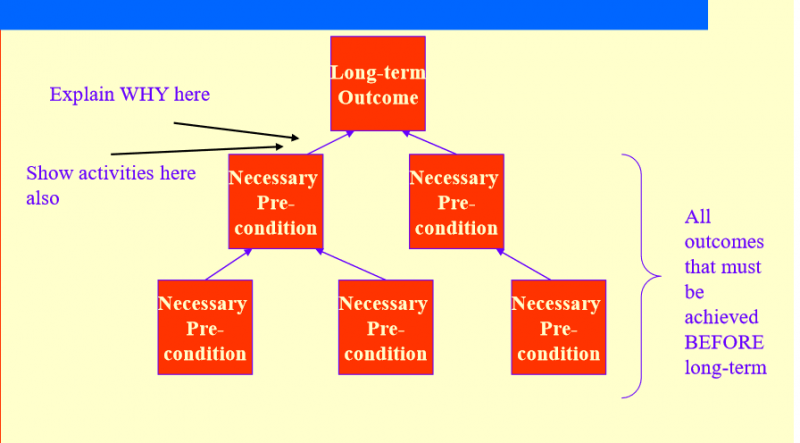 Diagram showing the design of a ToC (reproduced from Clarke and Anderson, 2004).

From the above table you will see that the preconditions (otherwise known as 'outcomes') leads to the achievement of the long-term outcome. Early outcomes must be in place for intermediate outcomes to be achieved; intermediate outcomes must be in place for the next set of outcomes to be achieved; and so on. To use our example from earlier, sensitisation and lobbying have to take place before childrens' awareness levels are increased, who in turn demand that their voice be heard and policy-makers have to be pressured before they take action.

Not only does the ToC show the outcomes/preconditions, it also outlines the causal linkages in an intervention between the shorter-term, intermediate, and longer-term outcomes. The identified changes are mapped—as the “outcomes pathway”—showing each outcome in logical relationship to all the others, as well as chronological flow.

Ideally, every outcome/precondition should be accompanied by at least one indicator to measure success.

Additionally, many ToC outcome pathways include an 'accountablity ceiling'. This is often represented by a dashed line drawn across the pathway that seperates outcomes the organisation will monitor and claim credit for attaining, from the higher-order outcomes that are beyond its power to achieve—For example, 'a world where all children are safe and protected' is outside the direct control of the programme. This higher order outcome would be placed above the dashed line.

The ToC diagram is flexible and does not have a particular format – it could include cyclical processes, feedback loops, one box could lead to multiple other boxes, different shapes could be used etc.

See examples of actual Theories of Change below (legible versions of the charts may be found here). 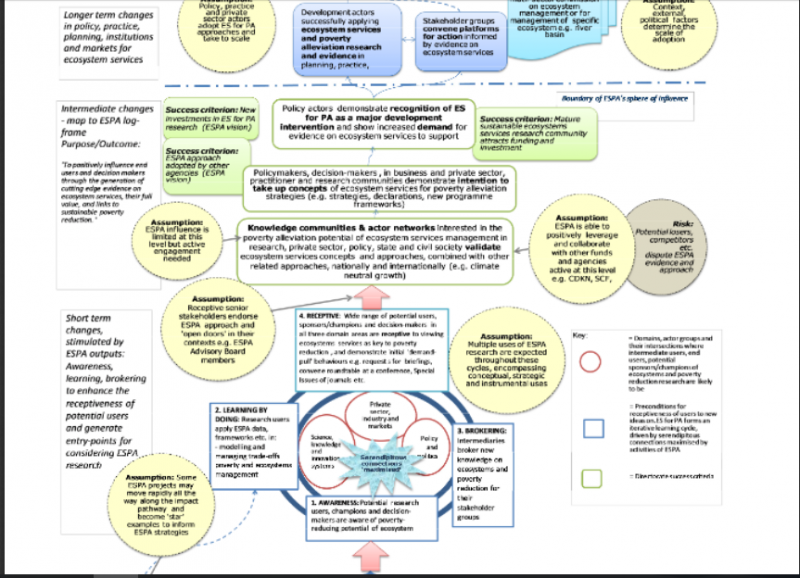 The above diagram is the Theory of Change for Ecosystems Services and Poverty Alleviation Research Programme http://www.espa.ac.uk/ - According to the Theory of Change, ESPA’s research will improve the lives of poor people in developing countries by filling knowledge gaps that currently limit the way that ecosystem services contribute to the alleviation of poverty. 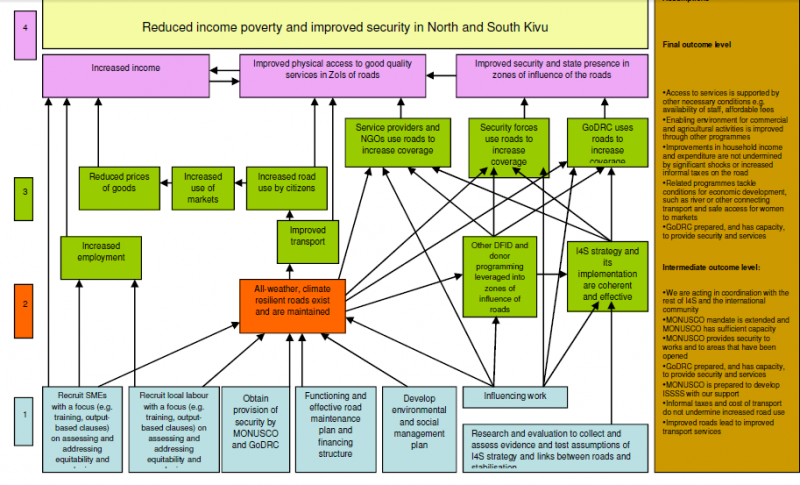 DFID Programme Theory of Change: Roads in East DRC is shown above. The theory of change is based on the fundamental logic that a road can provide access to markets as well as allow for the provision of security, which in turn can lead to improved incomes and security for the population of North and South Kivu. 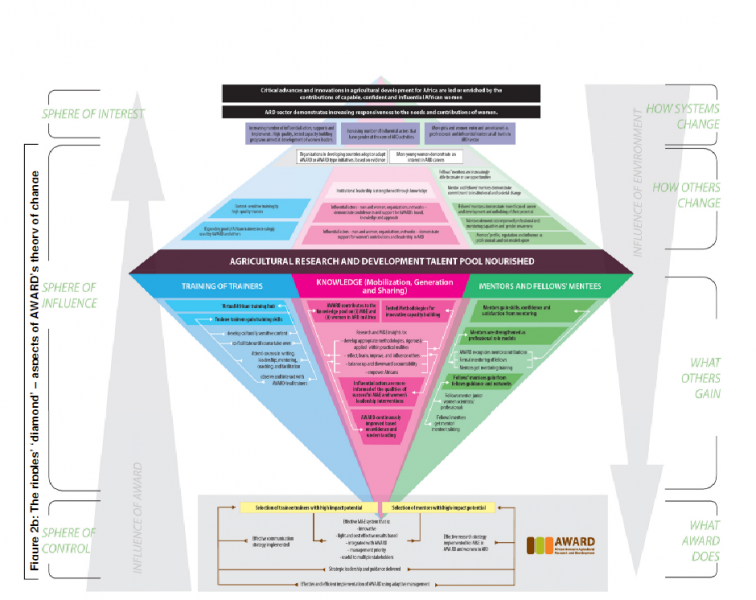 Theory of Change for The African Women in Agricultural Research and Development - AWARD http://awardfellowships.org/. AWARD is a professional development program that strengthens the research and leadership skills of African women in agricultural science, empowering them to contribute more effectively to poverty alleviation and food security in sub-Saharan Africa. 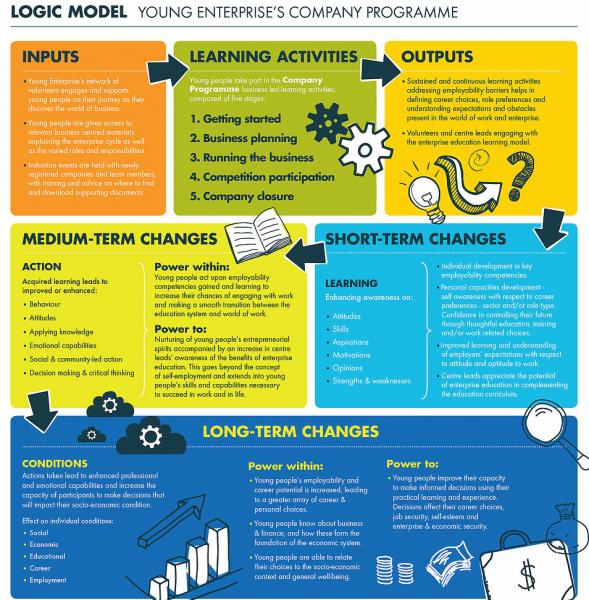 Young Enterprise Northern Ireland is a charity developing the entrepreneurial skills and aspirations of young people aged four to 25 to prepare them for the new economy. http://www.yeni.co.uk/impact/

More examples of actual Theories of Change may be viewed from a DFID publication found here.

Theories of Change are useful for understanding and assessing impact in complex programmes and hard to measure areas such as governance, capacity strengthening and institutional development.

The steps to create a TOC are:

General Features of a Theory of Change:

The contents in the above table is reproduced from Piroska Bisits Bullen's article.