Adaptive Management looks like it’s here to stay. Here’s why that matters.

This blog post originally appeared on Oxfam's blog From Poverty to Power on December 8, 2016.

The past two weeks in Washington, New York and Boston have been intense, leaving lots of unpacking for the blog. Let’s start with the numerous discussions on ‘adaptive management’ (AM), which seems to where the big aid agencies have found a point of entry into the whole ‘Doing Development Differently’ debate. 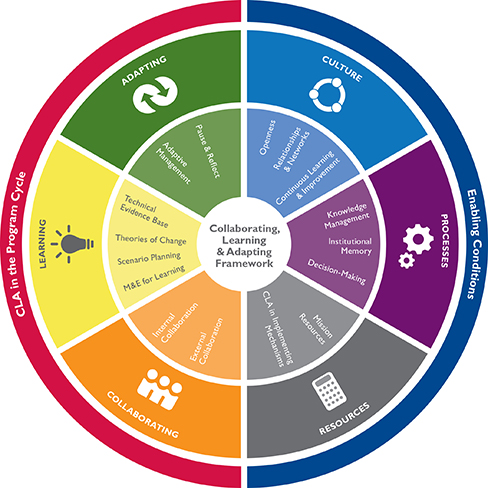 I spent a day with USAID and came away with a sense that AM has now got into its bloodstream and feels like considerably more than a passing fad. USAID is now pushing adaptive management down through the plumbing, requiring it as part of its funding procedures (not a very bottom up approach, it’s true, but when the pied paper plays, everyone dances). Its ‘Program Cycle Operational Policy’ – i.e. the new ‘guidelines to ‘implementing partners’ applying for funding, has as one of its 3 overall requirements: ‘Learning from performance monitoring, evaluations, and other relevant sources of information to make course corrections as needed and inform future programming.’ A handy two pager fleshes this out as an infographic, covering both the programme cycle, and the broader ‘enabling conditions’ (see below) for making AM more than just another buzzword. This feels like a big deal, given that USAID is (so far) the largest bilateral donor by miles, and seems way ahead of what I’ve seen in other bilaterals (DFID and co, feel free to set me straight on that).

Matt Andrews in his book The Limits of Institutional Reform in Development sets out a series of stages that institutional reform passes through:

With these guidelines, USAID appears to be entering that final stage, whereas many others (including Oxfam) are still at the earlier stages, with skirmishing between AM supporters and sceptics, old school logframers or value for money/results people.

Some further thoughts emerged during the numerous conversations:

How to distinguish between adaptive and indecisive? Course corrections could, after all, merely be a sign of someone who keeps changing their mind; ‘Failing Fast’ might show that you are rubbish at your job, not a budding venture capitalist. Funders and political supporters will need some kind of quality assurance if they are to buy into this, and one option might be a ‘third party audit’ function – someone external who accompanies a programme and can give an independent view on the quality of analysis and decision making. Sounds a bit like the way The Asia Foundation has hired a number of academics to accompany its country advocacy teams in recent years in a process it calls ‘strategy testing’.

Where’s the Evidence: In the end AM is only going to take hold if there is compelling evidence that it produces better results than the alternatives. That needs to be more rigorous and convincing than random praise-singing of iconic AM projects. One interesting approach is how AM and non-AM programmes respond to shocks – the Ebola crisis provided just such a ‘natural experiment’ in Sierra Leone, where IRC was able to compare how flexible and inflexible funding arrangements responded to events (not surprisingly, flexible did better). More please.

History: when old lags hear the hype about AM, they tend to roll their eyes and say ‘seen it all before’. Not good enough – could they then please go away and do some serious analysis of previous aid reform movements, and work out why some have had lasting impact, while others have faded away? I also have a suspicion that new thinking in aid is subject to a process of attrition, whereby it is slowly dumbed down and shorn of its more exciting aspects, as it becomes just another set of tick boxes. We probably do have to reinvent the wheel – recover the original excitement of earlier reform movements, perhaps even around the same ideas, with different vocabulary to make things seem new and funky. Is that such a terrible price to pay?

Are other trends in aid compatible with AM? In particular the payment by results movement just got a big boost from DFID’s Multilateral Aid Review, which plans to spend up to 30% of its funding to UN humanitarian and development agencies via PbR. In theory PbR should be compatible with adaptive management, in that it allows recipients to do what they like, as long as they get the eventual results. In practice, there are signs that it is not quite so simple, with PbR being used more to pass the buck on risk, than to liberate implementers to be more entrepreneurial.

And one lingering concern: AM could become just a technique for better programming, without any discussion of power or politics. I guess that would be better than dumb linear programming, but still, it would lose a lot in terms of understanding the system, or pursuing worthwhile change that ‘expands the freedoms to be and to do’ in Amartya Sen’s indispensable definition of development. How do we guard against that depoliticisation?

Knowing When to Adapt - A Decision Tree
LIBRARY RESOURCEMAR 05, 2019

Duncan - I appreciate your first and last "further thoughts". It is important to have something of a process, schedule, and feedback/statement on where, when, why a change is being made.

How to guard against depoliticisation - that is a good question.

Lastly, a shift in expectations and norms is required. Capacity building or guidelines at a minimum on when and why to apply different types of evaluation. Imiplementers need assurance that nimble, responsive, and smart approaches are powerful tools.

CLA in the Time of COVID-19: Adapting, Pivoting and Partnering to Maintain Nutrition Progress