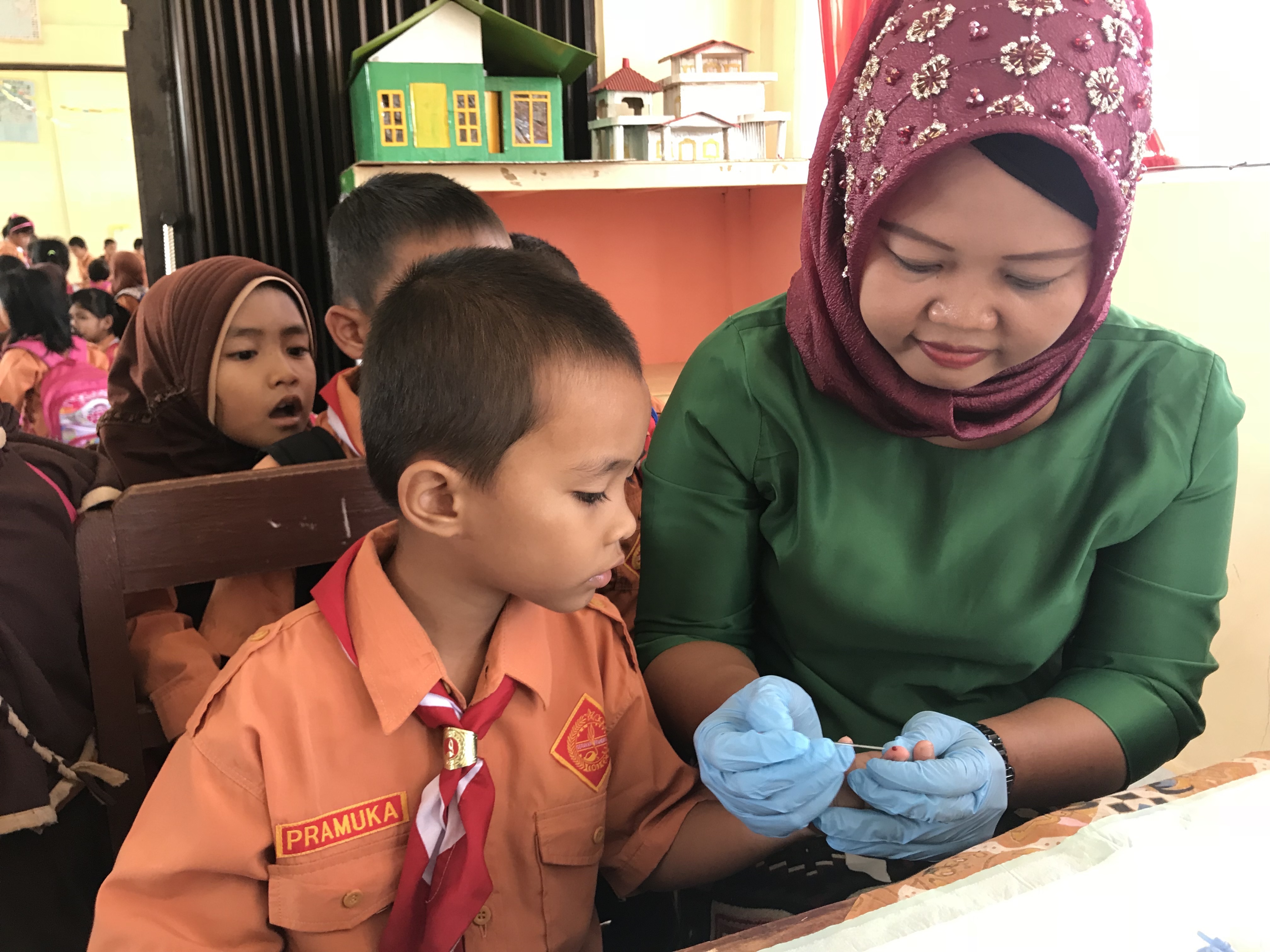 A young boy has his finger pricked during a transmission assessment survey in Indonesia. Photo credit: RTI International

In global health programs, the stakes are high. Failure is not an option when the end goal is saving and improving hundreds of millions of lives around the world.

But it’s inevitable that, along the winding and complicated road of disease elimination, setbacks will happen. For the past nine years, I’ve been working on neglected tropical diseases (NTDs) at RTI International, where I currently oversee our approach to facilitating collaborating, learning and adapting (CLA) for NTDs on ENVISION, USAID’s global flagship activity for the control and elimination of NTDs. Throughout this time, I’ve learned that a rapid, deliberate, and flexible response to failure is key to our success controlling and eliminating NTDs.

Take lymphatic filariasis (LF), a debilitating NTD that affects more than 120 million people worldwide, as an example. LF is targeted for global elimination as a public health problem; to reach this goal, mass treatment campaigns must be carried out in each endemic district for a number of consecutive years with high coverage. Once this step is complete, a series of surveys called Transmission Assessment Surveys (TAS) are conducted to ensure disease prevalence has fallen below acceptable levels.

Across the 19 countries supported by ENVISION, around 95% of the districts pass these surveys – but sometimes they fail.  While we think that’s a pretty great record with more than 625 districts passing a TAS, disease elimination requires a perfect score, an A+.  When they pass, we know that the population in those districts no longer needs treatment, a critical milestone on the way to elimination. When districts fail, it’s a signal that something needs to change.   So, how do we respond and adapt to these failures?

Plan for failure.  In investigating TAS failures, we started to find ourselves asking some of the same questions – Was the sampling correct? Were the teams well-trained? Was there high enough coverage? As a result,  ENVISION worked with the World Health Organization (WHO) to develop a set of checklists to help national NTD programs prepare for and supervise TAS, as well as investigate and respond to TAS failure. By anticipating these issues, teams are able to respond and adapt more rapidly to failure.

Be flexible. To support investigation and the implementation of an adapted approach, we create contingency budgets that can be flexibly allocated to countries that experience failure. Setting aside these resources allows us to respond quickly to needs and adapt our approach, which ultimately saves resources in the long run.

Get deeper in the data. Data collected through routine monitoring and evaluation may be sufficient when activities are going as planned, but additional data may be required to investigate how and why a failure occurred. Start with what you have, but don’t be afraid to do additional (often qualitative) data collection. For example, in areas that fail TAS, ENVISION often conducts interviews with community members, local and national health officials, and other key stakeholders to find out what worked and what didn’t work in the previous year’s treatment campaign.

Fail fast, but don’t rush the L and A. Electronic data collection and analysis enables the quick identification of failures and enhanced visualization. While we aim to learn about issues early and respond quickly, it’s important not to rush the process. ENVISION strives to be intentional about learning from a TAS failure, taking the time needed to do additional data collection, reflect on these new data, and determine the best corrective action to take. At times, we have delayed interventions to ensure we were effectively using our learning.

Communicate openly. Too often in global development, successes are shared but failures are hidden. That’s not our approach. All relevant stakeholders should be aware that a failure occurred, contribute to and benefit from learning, and agree with new programmatic adaptations. For ENVISION, that means we facilitate communication among national and local health officials, community members engaged in mass treatment campaigns, project staff in headquarters and the field, WHO, and USAID.

Of course, we aim to pass in the first place. But, if failure happens, we know we can’t continue business as usual. Using a CLA approach helps us respond quickly and effectively, making efforts to beat NTDs like LF even stronger.  The good news is, it’s working, and more than 208 million people in ENVISION-supported countries no longer have to worry about contracting LF. We might occasionally fail, but we are failing forward — seeing incredible progress in the fight against NTDs and learning a lot along the way.

So, you want to start a podcast?

CLA Through Data Management Systems: A Tale of Two Projects