Getting it Right When Thinking and Working Politically: Gender and Inclusion Matter

This is the second of four posts reflecting on the linkages between gender awareness and politically sensitive approaches to programming known as Thinking and Working Politically (TWP). Over the next 2 weeks, I will be posting two additional blogs. The first blog in this series addressed my personal epiphany regarding the potential for TWP to narrow our focus in a way that limits the space for critical considerations around gender and inclusion - and reflects on new resources to help us do this better. The next blog I will post explores how gender analysis and political analysis can be merged to promote inclusion--including where, if at all, the two lenses conflict. The final blog will reflect on recent experience within USAID, and consider the path forward, including tools to effect merger considerations around gender and inclusion. Please note that while the principles discussed can be applied to all aspects of inclusion, the current resources are focused on gender, as a key dimension.  As further learning becomes available, we’ll look to share more.

Click here for other blog posts in this series.

As I became more immersed in the world of “Thinking and Working Politically” (TWP), I was alerted to what seemed a surprising lack of attention to the impact of factors related to gender and inclusion on the exercise of power and politics.  And so I began to ponder: how would a thorough integration of gendered aspects of power and politics change what we know as TWP?

A principle of TWP is that how we work toward a goal impacts local ownership and sustainability beyond achievement of any objective alone. Inclusion is part of this “how.” In the absence of a gender and inclusion lens, we risk missed opportunities to further inclusive societies - whether by engaging with inclusive groups of local leaders or framing issues in ways that support inclusion - while we pursue other goals. At worst, donor programming may inadvertently reinforce exclusionary social norms. Moreover, where we limit our focus to more obvious expressions of power, we may overlook more transformative and sustainable pathways to change.

Thus, remembering gender and inclusion in the midst of TWP is less a merger, and more a matter of simply doing TWP correctly. 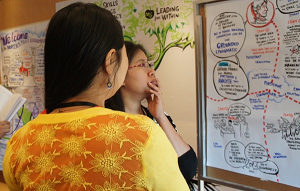 This point was illustrated in case studies of gender and TWP (reflected upon in a previous blog) in particular one describing the Australian-funded Peace Leadership Programme in Burma, which convenes women leaders to promote peacebuilding. The program uses gender analysis as a lens through which to understand the broader political landscape as the country seeks to transition from authoritarian military rule, even as the military carries on a campaign, displacing hundreds of thousands of Muslim Rohingya in Rakhine state. The gap in women’s decision-making power and formal role in peace processes, it argues, reflects a structural power imbalance. In turn, the limited involvement of strong women leaders hinders the effectiveness of peacebuilding efforts - something the program seeks to address.

While the story is overwhelmingly one of the complementarities - even the inseparability - of an inclusion lens and TWP, it also highlights a possible tension.  Exclusive focus on the women best positioned to impact peace efforts would leave many others from lower strata of society or power unrepresented. The program balanced its immediate, politically informed peacebuilding mandate with a longer term vision of inclusive social change, seeking to build diverse representation in each leadership cohort, and involving elected officials, but also NGO leaders and others who have demonstrated leadership in less formal ways.

The importance of incorporating the contributions of women to peacebuilding efforts has long been recognized. This is less the case when it comes to supporting the contributions of women to the full spectrum of economic sectors, including construction.  The Bangladesh Skills and Employment Program, “Sudokkho,” supported by the Department for International Development (DFID) and the Swiss Development Agency, promotes gender and social inclusion while maintaining a primary focus on skills development and employment. 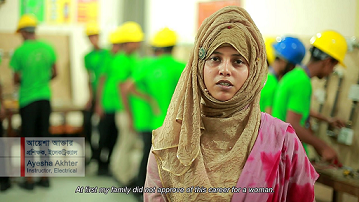 Driven by growth potential, Suddokkho selected two sectors of focus: the garment industry, where women comprise the majority of employees, and the overwhelmingly male construction industry. Suddokkho employs a number of approaches to mainstream gender and inclusion, including a gender adviser to identify how each intervention can be more gender aware. The program also directs pilot interventions at particular challenges, such as enabling women’s employment within the construction sector. For example, experimenting with supporting married couples to work as teams, where husbands effectively “chaperone” their wives as they negotiate entry into the sector. In this way, Suddokkho is expanding employment opportunities, while also addressing broadly entrenched gender norms - little by little expanding local understandings of the work that women can do.

In the case of Suddokkho, and many other examples, a more inclusive approach to programming begins with inclusion on the team. This entails working to instill and reflect values within the team, and making them more effective when seeking to impart those values within workplaces.

These cases illustrate that TWP is only strengthened - both, pragmatically and as a reflection of our ideals - by an unequivocal embrace of gender and inclusion as elements of power. Moreover, they highlight the potential to pursue broader goals around inclusion without compromise to the original programmatic objectives--as with Suddokkho, which successfully promoted employment and skills development, while also shifting gender norms within the targeted industries.

Fundamentally, they also demonstrate the need for this approach to begin with what we can best control - ourselves. Our approach to work within our teams and definition of the challenges that we confront provide a critical foundation to successful efforts to merge political sensitivity and gender awareness.

Which recalls the words of Gandhi:  “If we could change ourselves, the tendencies in the world would also change.”  It is perhaps, at least, a beginning.

Thinking and Working Politically... and Inclusively

Playing the Game to Change the Rules: Thinking and Working…

Thinking and Working Politically and Inclusively: How We’ve…