Intentionally Creating and Maintaining the LEARN Culture: “Walking the CLA Talk” Part 1 of 6

This blog post is part of a USAID Learning Lab series called Working Smarter: Everyday CLA techniques to help you be more productive. The goal of the series is to share practical ways to integrate collaborating, learning, and adapting into your work.

Piers Bocock is Chief of Party of the USAID LEARN contract.

As promised in my blog from earlier this month, this is the first installment of a 6-part series in which I share my personal observations and application of USAID’s Collaborating, Learning and Adapting (CLA) Framework over the first two years of leading USAID’s Knowledge Management and Learning (LEARN) contract. For this first installment, we’re starting with the “Enabling Conditions” side of the graphic, with a focus on creating and maintaining a team culture that supports all of our work, as it relates to the “Culture” component of the CLA Framework. 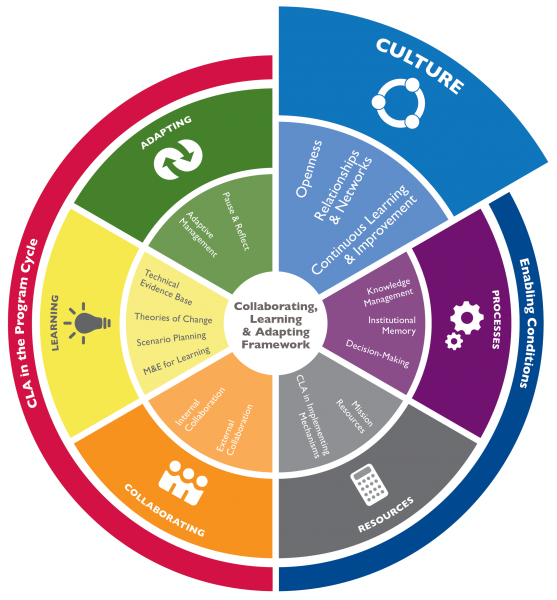 On a crisp January morning two years ago, a newly formed team of ten individuals gathered around a 30-foot faux wood conference table. Most were meeting each other for the first time, making the usual development credentials small-talk—which development firms they’d done time with, how many countries they’d been to, who knew who within the Agency they’d now be serving. A pair who had worked together previously were laughing over something in their shared past. At least three of the ten sat quietly observing, watching, listening. I had greeted each one as they’d entered the room, putting faces to the voices I had spoken to over the phone during the interview process.

Over my 25-year professional career, I have worked for great organizations and terrible organizations (and some in between). Throughout this time, the single biggest challenge I’ve faced is recruiting and retaining great, emotionally intelligent, humble, loyal, proactive, productive, creative, client-focused teammates. I have become convinced therefore that once you find them, you have to find a way to keep them. And to keep them, I’ve learned, you need to provide a nurturing and supportive environment in which people want to produce their best in support of a larger goal, and want to continue to contribute for as long as they are valued and challenged.

In that first meeting on January 5th, I welcomed this group to the official start of USAID’s LEARN contract. As part of that first team meeting, I was very clear that I wanted to create a different kind of development project, based on providing an environment that would encourage people to stick around for the life of this 5-year effort (rare in the development business), one that valued openness, reflection, collaboration, creativity, and shared success. I told the team that I had been talking this through seriously with my two deputies, Sarah and Angelina, since we were awarded the contract at the end of September 2014, when I was still living in France. We were unified in our commitment to build a strong and supportive team first, and focus on the technical work next. In some I saw the optimistic nods of the hopeful, and in others the skeptical looks of those who had been through this kind of welcoming speech before. But then I shared with them some of my previous work experiences, and explained that I had specifically come back from living in the south of France to take on this challenge. That got some looks of surprise. In that same meeting, Sarah, Angelina and I went a step further: we stated unequivocally that the last day of each month would be dedicated to personal reflection and team creativity. We dubbed it “Reflection Friday.”

At our first Reflection Friday at the end of our first month, the team was nonetheless surprised when we started with a period of meditation followed by a peer appreciation exercise. That afternoon, having noted that people were actually starting to believe that this team might be something special and that the welcome speech may have been more than just words, we went through an exercise in which we identified the characteristics that epitomized the worst work experiences we’d each had, and on the flip side, the values that each person had noted in their best experiences, or most sought in a collaborative work environment. Clustering those responses together, we came to a co-created set of common values for the LEARN team that still resonate with us today. We have them on posters around the office; we revisit them frequently when we ask ourselves how we’re doing as a team; and we include them in our semi-annual performance and 360 reviews. 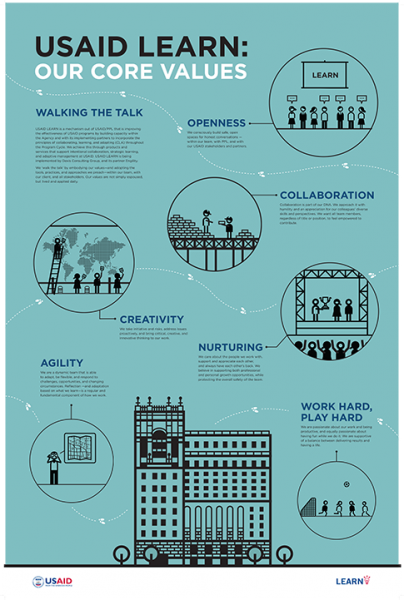 To find out what LEARN’s team values are, and more about them, read my colleague Monalisa’s blog on the topic. But my job in this blog is talk about the value of intentionally focusing on building a learning culture in an organization, a team, or—as is often the case in our work—a USAID country-based Mission. In the CLA Framework, and in the processes we facilitate with USAID operating units, “Culture” is one (and some may say most important) of the six primary components of a “learning” Mission (or Bureau, Office, etc.). Within “Culture,” we focus on three subcomponents, essentially the degree to which:

I think that my team would say I’m nothing if not open. It is one of LEARN’s core values too. At times, it has backfired. People can try to take advantage of the “nice” boss. But I can tell you unequivocally: if you never make yourself vulnerable to taking a chance on someone, you also never get the reward of being wildly, positively, surprised by the contribution of a colleague who’s been given the freedom to be creative (another of LEARN’s core values). I believe in trying to build a positive environment in which everyone’s opinion counts, everyone’s ideas are valid. I’ve worked for narcissists and bullies, and what they share (besides rapid turnover in staff) is a lack of openness to others’ ideas. I am very clear that the success of the LEARN contract is due to the technical expertise and the smarts of the people on my team; all I do is try to create a culture that supports their potential.

My firm belief in a strong foundation for collaboration—another of our team’s core values—is grounded in the recognition that without trusting and mutually supportive relationships, a team will never truly gel. Leveraging the broad array of information, signals, knowledge, feedback, and observation our team gets on a daily basis, the truly emotionally intelligent are able to do what we call sense-making; what’s more, they share it with the team. We have a whole internal system dedicated to rapid feedback and intel that will help the rest of our team in daily interactions across the Agency. It is built on the principle that if one of us succeeds, we all succeed (as does the entire field of international development); and if one of us fails, we all do. Ego has no place in a well-functioning team.

While my experience in knowledge management, innovation, and leadership helped qualify me for my position on LEARN, I have never professed to be an organizational development expert. But it just seemed natural to suggest we try, as a team, something as outlandish as “Reflection Fridays.”  What’s been heartening is that when we worked on developing this CLA Framework subcomponent with our partners on USAID’s CLA Team, it was clear we were already practicing it on ourselves. It also helps that USAID’s CLA team is open to our continuous learning and improvement approach. They are active participants in the design and implementation of our work plans, which we design in manageable, measurable, adaptable six-month increments.

But saying all this is still just talk; at the risk of sounding like a broken record, we have to walk it too. And that starts with me, with Sarah, with Angelina, and it has to be infused throughout the team continuously. It’s much easier to create values than it is to live them. There have been times when we have struggled as a team over the past two years, but it has been through the lens of our own values, and our focus on a positive, enabling culture that has helped right the ship every time (while making sure to understand what may have threatened to throw us off course and adding it to our collective radar as we move forward). We regularly check in on ourselves to ensure our culture is what we set out to create in the first place. One of my commitments this year is to ensure this focus on an open, people-centered, adaptive philosophy is always front and center.

Tune in next month when I continue to reflect on the necessary enabling conditions for systematic CLA, with attention to how LEARN is focusing on systematic processes to learn and adapt for improved effectiveness.

Measuring the Unmeasured: Assessing the Value of Evidence for Social Impact

In Conversation with a 2019 CLA Case Competition Winner